The creation of a “lessons learned place” – Notes on doing research in the coal mine area of Tete, Mozambique

“More studies, more studies! Ok, it is necessary to do those studies, but to what end?!” Carlos (a pseudonym) was furious. It is October 2016 and one of my first discussions with Carlos in which I ask him about his opinion on a critical report of Oxfam on the living conditions in Mualadzi, a resettlement area where 736 households have been relocated for a coal mine of the Australian company Rio Tinto (later taken over by an Indian consortium called ICVL) in Moatize, Tete province Mozambique.

Only recently, Tete was described as the “El Dorado of coal” (Kirshner and Power 2015) and with grant investments by companies such as Vale and Rio Tinto it was seen as the start of Mozambique’s promising extractive future. Yet, due to the low coal prices, transportation difficulties and, more recently, a series of attacks on coal trains by armed combatants, the boom has turned into somewhat of a bust. Nevertheless, the impact of the coal industry in Tete is tremendous and the involuntarily resettlement of thousands of people is one of its more controversial consequences. The governance practices that surround these dislocations are a topic of my research on the extractive industry in Tete, hence my discussions with Carlos, a reassentado (resettled person) from Mualadzi, about the Oxfam study. 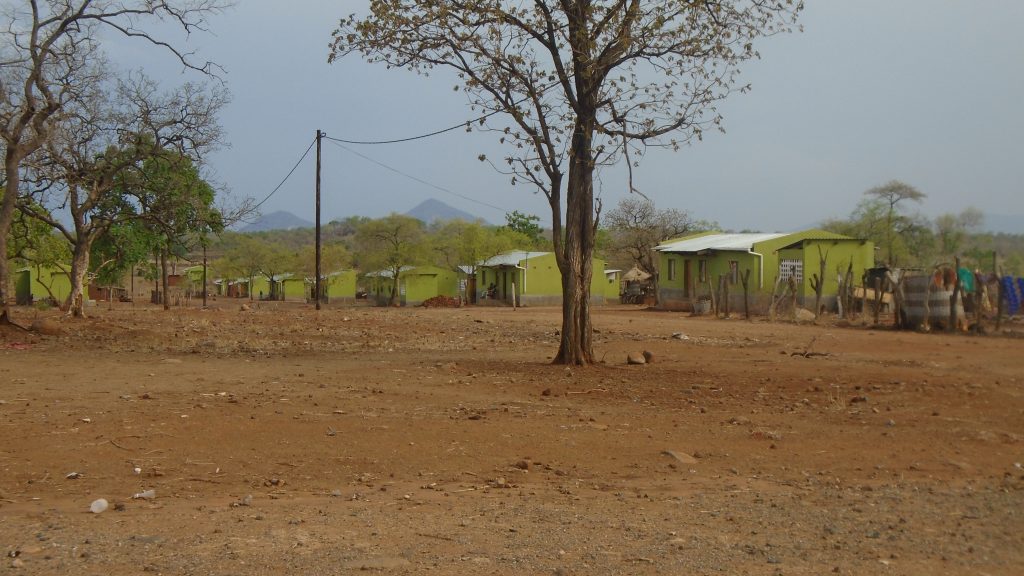 A street in Mualadzi, a resettlement area in Tete, Mozambique. Photo by Nikkie Wiegink, November 2016.

As the Oxfam-study detailed, and as I observed during my (later) stay in the resettlement area, the situation in Mualadzi is dire. Many reassentados lost essential livelihood means by leaving their area of origin. In 2013 and 2014, they moved from their homes on a fertile riverbank to an arid-dry land with insecure water supply for personal and agricultural use. Moreover, the area is remotely located and the poor transport infrastructure has reduced access to employment and other economic activities. During my stay, people struggled to provide food for their families, and several of the reassentados left Mualadzi after selling their roofs and whatever else they could take off the house.

Carlos continued animatedly to reflect on the Oxfam-study: “They diagnose the patient with malaria, but then they do not provide the medicine.” This is a familiar metaphor used more generally in Mozambique by people to express resentment of being objects of study while they are not seeing much change in their daily lives. However, in the case of Mualadzi there is an added element of irony.

In November 2016, Oxfam’s activists visited Mualadzi again, this time with a delegation from Palma consisting of people who are going to be resettled. I was present at the meeting and the delegates from Palma were visibly taken aback by the stories they heard in Mualadzi. One of the reassentados provided advice: “My brothers, if I were you I would not accept resettlement, it is a disgrace. A deceit.” Then one of the NGO representatives intervened, and said: “It is not very productive to discuss if resettlement will be accepted or not.” Implicitly he referred to Mozambican law by which all land is owned by the state and which privileges the extraction of natural resources over other types of land use. He continued: “rather we should focus on what the Palma delegation can learn from the experiences here, in order to not repeat the same mistakes.”

Mualadzi’s status as a “lessons-learned place” also became apparently clear during the First National Meeting on Resettlements that took place in the city of Tete in November 2016. During the opening session, the National Director of Territorial Ordinance and Resettlement pinpointed the problems in Tete and suggested “to be constructive and identify the errors that have been made.” The participants, mainly government representatives and representatives of the extractive industry, had visited the resettlement areas on the first day, and repeatedly used Mualadzi and Cateme as reference points throughout the conference. A representative from Gaza province said: “the resettlement of Cateme, with all its difficulties and all that could be improved, was a school for us. And we are taking note of this, in order to not return to these situations.” 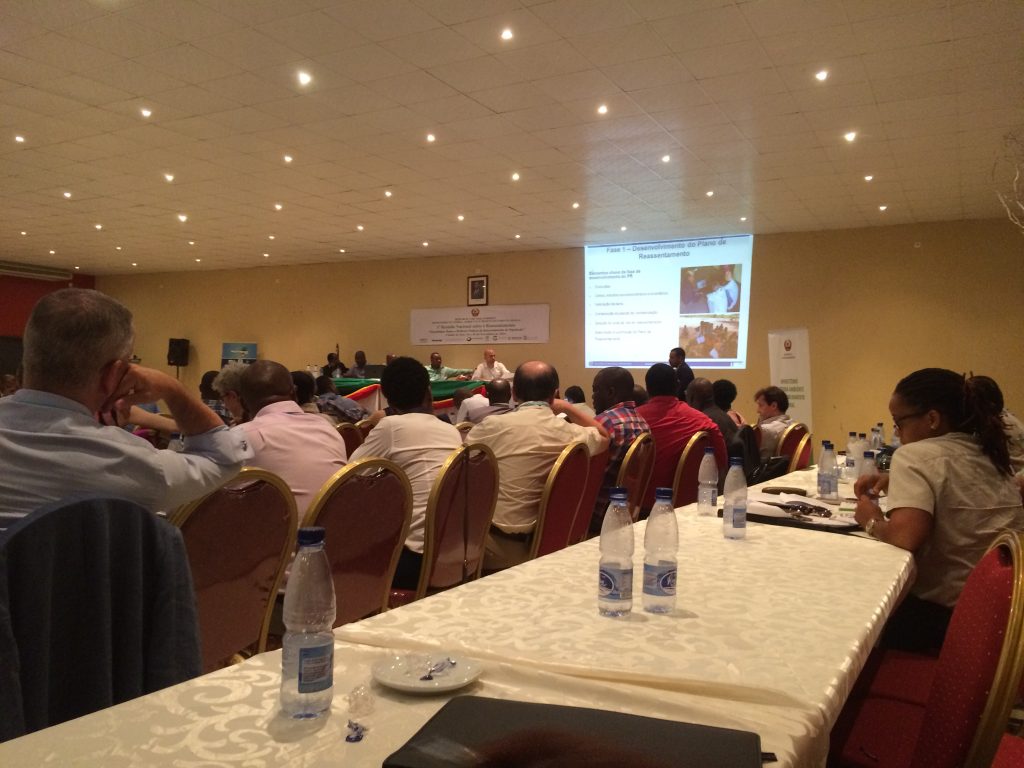 A presentation during the First National Meeting on Resettlements in Tete, Mozambique. Photo taken by Nikkie Wiegink, November 2016.

Obviously “lessons learned exercises” should be done and the inquiry into how Mualadzi and Cateme “could have happened” is valid and valuable. Yet, in the current situation, these studies and lessons learned are of little use for Carlos and his fellow reassentados, who seem increasingly irritated by being the subject of another case study.

Back to the conversation with Carlos. After his rant on “those studies” a third person, also present at the conversation, tried to change the topic and asked me about my research plans. “Are you planning to visit the resettlement areas?” she wanted to know. Instantly, I felt awkward and only half-jokingly I said: “Ay, I’m not sure if I want to talk about this, he [I nodded to Carlos] will say that I will end up doing another one of those damn studies!” They laughed and then Carlos said: “Nooo, I was just making conversation. It was a way of talking. Bater papo, like we say here. You should come to Mualadzi and see how we live over there.”

I felt relieved, but just a little bit, as this conversation also triggered uncomfortable questions about my own role and contribution to mining and its consequences in Tete. Will I also be diagnosing the “patient” (in a more ethnographically fashion perhaps) and then leave the reassentados without providing a remedy? And more general, to what extent could and should I take up a more activist role than I had initially envisioned? And if neutrality is an illusion (Ballard and Banks 2003:306), how do I maneuver myself through a research that is multi-sited (resettlement areas, government conferences, companies offices, etc.) and involves multiple actors (reassentados, company personnel, NGO staff, government representatives, etc.)? Indeed, as Welker (2016) recently restated (quoting Ballard and Banks 2003), “mining is no ethnographic playground” as it is often the stage of conflict, high stakes, and loss of livelihood and lives. Doing research in the world of mining thus warrants special attention to the researcher’s political and ethical position. There are no fully satisfactory answers to the questions I posed above, but similar to Welker (2016), I find that deliberating these questions is a necessary, often uncomfortable and continuous part of the research process.