Reversed rushes? Expulsion as a dominant feature of gold miners’ mobility in Guinea and Mali

When I was carrying out fieldwork in Guinea and Mali between 2010 and 2014, some ministry officials, with whom I discussed the topics of mining and migration, used the nineteenth century US gold rush as an analogy to explain why thousands of people choose to live in temporary settlements across West Africa. Indeed, these artisanal gold miners mainly rely on non- or semi-mechanical excavation methods to extract ore and predominantly use gravitational techniques to purify it, thereby supposedly placing their future in the hands of chance and the hope that their lives will be transformed once they strike gold.

Yet, although this is an appealing – and popular – analogy for artisanal mining in West Africa, the image of the “gold rush” has been demonstrated to be rather problematic when the actual mobility dynamics of artisanal gold miners are considered. This is for at least three reasons: first, as several studies have convincingly demonstrated, gold mining is now an integral component of rural livelihoods in West Africa, and it cannot be reduced to simply a wild attempt to strike rich (see e.g., Hilson 2016). Secondly, in many cases, gold is not mined from newly discovered deposits; instead, most artisanal mining fields in the region have been well known for decades and have seen significant small-scale reinvestment on the part of artisanal miners at a time when few economic alternatives are comparatively as viable. Thirdly, in the gold mines where my informants used to travel to across Guinea, Mali, Senegal and Côte d’Ivoire, migration to new mining settlements is rarely because people believe that they will find more gold there. More prosaically, such population shifts are more likely caused by an expulsion from a previous work site, because of which they are compelled to pursue their mining activities elsewhere. This third point is the principal claim of this short note: the massive influx of artisanal miners in one location is rarely the result of a rush for gold; rather, it is more often a pragmatic response to their expulsion from another mining site.

Settlement at the mining site of Kokoyo, Mali in 2011. Picture by Matthieu Bolay.

Rushing or adapting to the expansion of formal(ized) industrial mining?

When human movement is discussed in the context of gold extraction, it is often framed either in terms of a “mining rush” (i.e., moving to) (e.g., World Bank 2002) or in terms of “mining induced displacement” (i.e., being removed from) (e.g., Downing 2002). In view of West Africa, these two “push and pull” dynamics seem to have largely merged and to have led to the emergence of new forms of itinerant labour. After years of pursuing mining activities as a source of livelihood, and in light of their increasing standardization, recent changes in mobility patterns in Mali and Guinea can no longer be explained by the twin concepts of either “rush” or “displacement”. Two recent trends have had far reaching effects: first, several mining companies have been granted large leases (mainly exploratory) in the last twenty years; several of these companies have moved from exploration to formal or informal exploitation, i.e. extracting gold semi-industrially while still relying on an exploration permit (see map below; see also Mining titles for gold in Mali and Mining titles for gold in Senegal). Second, states have begun enforcing policies to formalize the artisanal sector, thus prohibiting artisanal miners from working in areas where they used to operate informally. 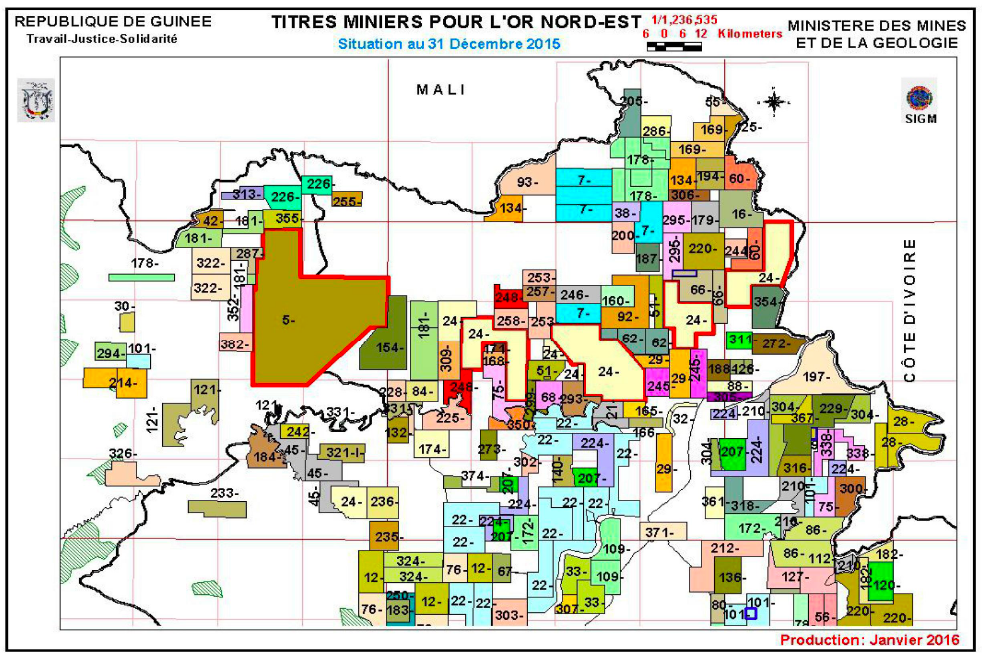 Together, these two trends produced a shift in public and legal categorizations of artisanal miners; they were no longer seen as “informal” (and tolerated) but as “illegal” (and removable)—this emphasized their position in the legal system rather than their position as a consistent component of the gold supply chain and the regional economy. As Nicholas de Genova has argued in the case of “illegal migration” (2002), the “legal production of illegality” renders certain categories of people “deportable” (or expellable in this case). In the context of Guinea and the neighbouring countries, this production of illegality is increasingly institutionalized as a means to indirectly govern mobility and labour in the artisanal mining sector. Although the image of thousands of miners gathering in mining settlements and temporarily cooperating to mine gold resembles the imagery of a gold rush, a closer look at the stories structuring miners’ journeys – in particular at the events that led them to shift to new mining sites – points to an inverse dynamic: as pointed above, rather than an irrepressible attraction to newly discovered sites, it is most often their expulsion from a previous work site that provoked their mobility. These expulsions are justified through official legal registers and enforced by police forces under labels such as “ratissage” or “déguerpissement”.

The journey of Kalou, a malinké 34 years old man from upper Guinea who started mining gold at the age 22, illustrates this point. After leaving for an “adventure” to Côte d’Ivoire, where he accidentally stumbled onto gold mining in 2006, Kalou returned to Guinea in 2008. Since then, he has continued to work in artisanal gold mines, regularly relocating himself after expulsions and mine closures. The table below maps his main moves (i.e., not including short trips to neighbouring mining sites around one location). 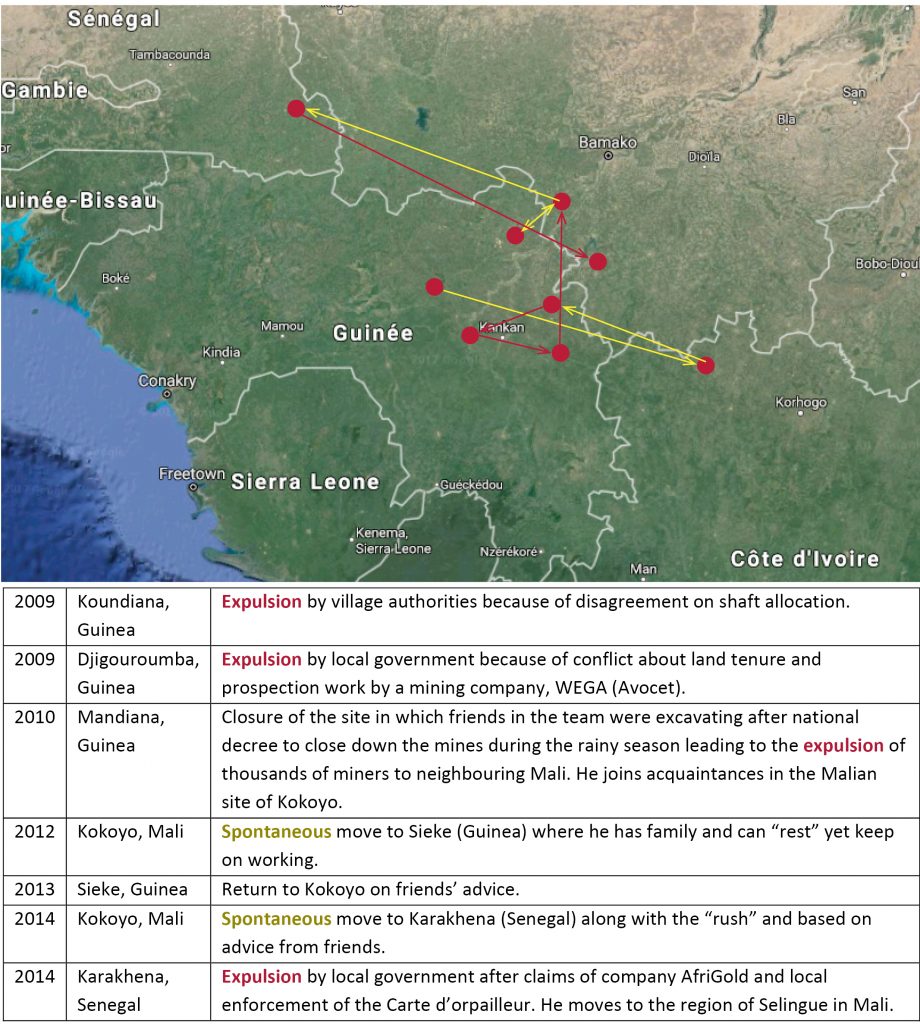 Kalou’s moves between 2009 and 2014. Map produced by Matthieu Bolay

One example of the tendency to relocate artisanal mining in the realm of illegality is the address given by Guinean President Alpha Condé during the recently held “Journée Nationale des orpaileurs de Guinée” (Guinean Gold Diggers’ National Day, February 7th 2017, Kankan, Guinea). In his speech, he addressed artisanal gold miners (nearly all of whom operate illegally), paradoxically asking them to fight “clandestine” extractive activities. Neighbouring countries have taken similar stances towards formalizing – and criminalizing – informal gold mining, which has led to recurrent expulsions and mine closures. In Côte d’Ivoire, 158 mining sites in the North West were closed in 2015, and 429 in 2016. In Senegal, a 2013 decree unpredictably and temporarily forbade gold mining in the eastern region of Kedougou, where mining activity is largely concentrated. 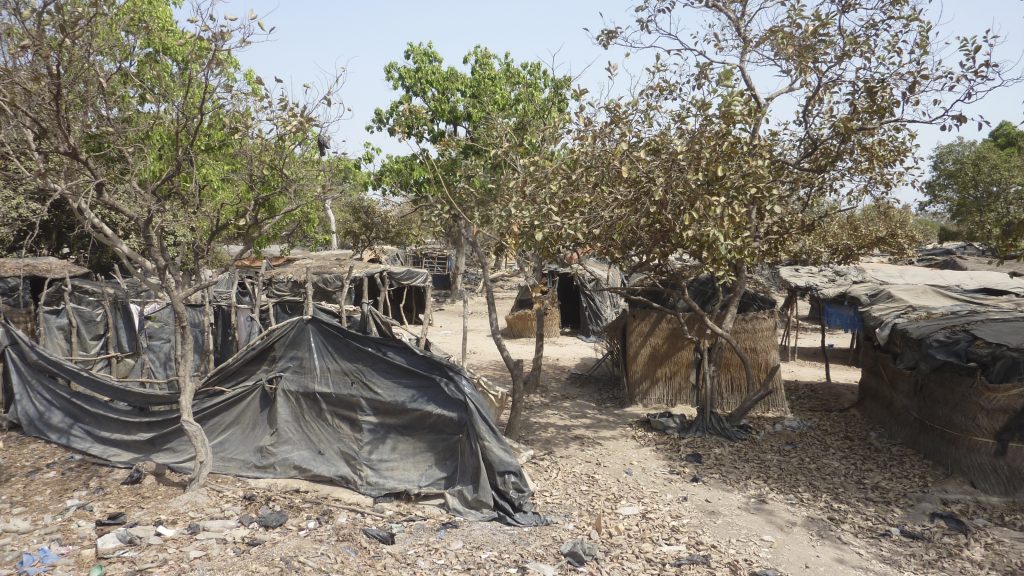 Often, artisanal miners are removed from their mining site to create room for industrial exploitation or exploration coupled with informal extraction; this is a trend that Sabine Luning (2014) has already documented, arguing that mining corporations treat artisanal miners as easily removable “pathfinders” whose activity can indicate rich deposits of gold. As illustrated by Kalou’s journey (see above), miners’ condition of being expellable lead them to develop lifestyles where they can quickly relocate to other sites and start mining again. In other words, they use their mobility skills and social networks to continue practising their livelihoods alongside the expansion of the industrial sector and the enforcement of formalization policies, consequently fulfilling the demand for artisanally mined gold in regional hubs. Hence, they operate not only as pathfinders for mining corporations, but also as scavengers who collect the less profitable ore at the edges of corporate mining sites, or the unprofitable leftovers after a corporation has closed its operations, moving mainly between settlements in accordance with their successive evictions. From the mobile perspective of these “itinerant miners”, their movements are characterized by forms of continuous mobility within the interstitial territories that remain temporarily accessible to them before land is formally allotted to registered mining companies.

Paradoxically, while public announcements of artisanal mines’ closure multiply, local exporters interviewed in Bamako have allegedly not seen any decrease in their artisanal gold supply. Therefore, echoing theories on the legal production of illegality to fulfil specific labour demands (e.g., De Genova 2002; Mezzadra and Neilson 2013), the concept of “expulsion-induced mobility” better describes the functioning of the informal artisanal sector alongside the expansion of the formal industrial one while retaining its autonomy as a flexible and separate component of the gold supply chain. Rather than “rushes” or “mining-induced displacement”, such movements can be seen as artisanal miners’ strategy to adapt to the changing geographies of gold extraction and to continue their main source of livelihood.