Criminalization and violence in natural resource conflicts in Guatemala

July 22, 2016 (Guatemala City). Seven ancestral authorities from Santa Eulalia who were detained because of their advocacy against two electric power dams in their community, are released from prison after sixteen months of detention.

The above cases are exemplary for conflicts over natural resource extraction in Guatemala (and Latin America in general) today. Whereas the Guatemalan government advocates large-scale ‘development’ projects such as open-pit gold mining and hydroelectric power dams, people that live on or near proposed extraction sites, often value their land as indigenous territory, as part of their livelihood, in terms of biodiversity and as combinations hereof. There is a growing, well-organized, multi-scaled resistance towards such ‘megaprojects’. At the same time the use of penal law and anti-terrorism legislation as a way of disqualifying social protest increase, as do human rights violations and violence in conflicts over megaprojects. Activists are portrayed as ‘against development’ and their resistance is treated as a threat to internal security. Acting up as citizens, they are turned into criminals.

The opposition to neoliberal extraction and other ‘development’ projects in Guatemala is rooted in a violent past and present of racism and exclusion. After the conclusion of the armed conflict (1960-1996), during which the state turned especially against its indigenous citizens, the Guatemalan government formally recognized the rights of the indigenous population through the Accord on the Rights and Identity of Indigenous Peoples and by ratifying the ILO Convention 169, also on indigenous rights and identity. Numerous indigenous Maya organizations, loosely grouped as ‘the Maya Movement’, of which some had played an important role during the peace negotiations, became important actors in the process of creating ‘indigenous citizens’ and putting indigenous rights, such as the right to speak Maya languages, practice Maya spiritualty and customary law, and participate in decision making processes concerning the development of indigenous communities, into practice. At the same time, however, the Guatemalan government also proceeded to reform the Mining Code, making it easier and more attractive for foreign firms to extract natural resources in the country and to give out concessions without consulting indigenous populations to national and foreign firms. Large parts of Guatemala, including regions where the indigenous populations suffered most during the armed conflict, became covered with mining concessions. Activists often describe this as the ‘third genocide’ in interviews, linking what they call neoliberal development directly to colonization and the 36-year armed conflict.

Today indigenous communities apply legal instruments to reject extractive projects, mostly using their right to be consulted about the development of their own communities. This right is laid down in the ILO 169, the UN Convention on Indigenous Rights, but also in Guatemalan legislation such as the Municipal Code, the Decentralization Law and the Law on Rural Development Committees, as well as in the Accord on Identity and Rights of Indigenous Peoples – all issued or reformed after the armed conflict as part of the peace process. Between 2004 and 2015, 94 of such consultations were organized. They show a general negative stand towards large-scale development projects. 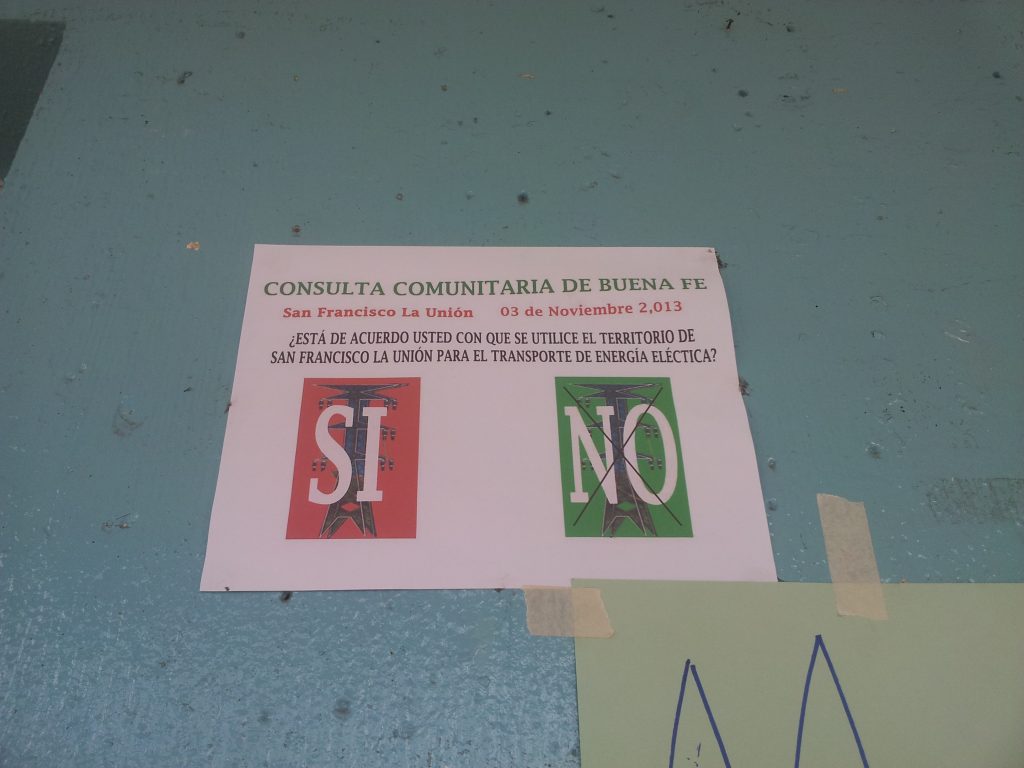 Yes or NO? Photo by Elisabet Dueholm Rasch

Although community consultations have produced local processes of engagement and participation, it has not influenced national decision-making processes directly, i.e. in very few cases it has actually stopped extractive projects. In addition, there is an increase of the use of penal law and anti-terrorist legislation to obstruct social mobilization. Many activists suffer from multiple forms of intimidation and violations of human rights, including threats, injuries, killings, and lack of protection. Activists have been murdered, illegally detained and often face numerous lawsuits against them. In 2015, 185 environmental activists were killed in Latin America, of which 10 in Guatemala.

Local political authorities, the military, the so-called poder oculto (hidden power), individuals and groups involved in organized crime (including drug trafficking) that often have roots in paramilitary structures are all seen to play a role in violence and criminalization at the local and national level. Analyses cautiously point at possible relations between the presence of these actors and high rates of homicides and violations of environmental activists’ human rights. Explanations are sought in the observation that violent ‘entrepreneurs’ or ‘specialists’ remained in place after the armed conflict ended. Furthermore, illicit groups remain intimately connected with the state (or are part of it).

Criminalization and violence shapes the daily life and work of activists and their families. Women activists tell stories of how their husbands are threatened to have to watch their wives being raped. There are tears in the eyes of one of my interlocutors when he remembers the murder of the Honduran activist Berta Cáceres, who successfully fought against Agua Zarca Dam and was killed by armed intruders. There are stories about how much time it costs to be threatened and criminalized, how much time it takes to go to court, to handle the paperwork. All these stories are embedded in memories of the armed conflict, which are very much part of everyday life in the communities where the activists come from. In their narratives of the violence and criminalization they experience, they often refer to this past in order to understand what is going on in the present.

Where does this leave anthropologists?

In some cases, criminalization is extremely effective; some activists only have time to fight the fact that they are being criminalized. Although communities and organized groups continue to organize consultations, bring cases to the Interamerican Court of Human Rights and speak out on speakers tours in Europe – among many other acts of resistance, the Guatemalan case confirms that, as Kirsch (2010) has also argued, natural resource conflicts in the domain of large scale extraction always imply structural differences in power between companies and the involved communities. Indeed, “mining is no ethnographic playground”, as Nikkie Wiegink has also argued on this website, reflecting on the work of Welker (2016) and Ballard and Banks (2003). It is a research domain that not only brings about questions about the political position of anthropologists, questions that are important to reflect upon, but also a commitment to becoming part of the social change that the involved communities aspire and ‘generating the kinds of knowledge they [the involved organized groups or communities] ask and need us to produce’ (Hale 2006: 113). This involves being part of social change through the relationship with an (organized) group of people, and not only disclosing such inequalities through the content of the knowledge produced. As such, anthropological writing and research becomes a site of resistance (Low & Merry 2010).