When starting fieldwork in the Emiliano Zapata community in the state of Veracruz, Mexico in 2016, I was mainly interested in conflicts about hydraulic fracturing, commonly referred to as “fracking” – the practice of fracturing the subterranean rock deep below the surface to extract oil and/or gas. Fracking has been a topic of concern in Mexico since the approval of a series of constitutional amendments in December 2013 known as the Mexican Energy Reform. This reform, which enabled foreign investments in oil and gas exploration and production, led to a growing number of fracking projects in the country. However, the last decade has seen more and more conflicts related to fracking, especially regarding its environmental impacts. Fracking is said to trigger seismic events and major ground water and air pollution, thus damaging flora, fauna and the population living near fracking sites.

Given the controversies around fracking and taking recent newspapers articles reporting on the devastating situation and local protests against fracking into consideration, I expected to find the people of the “Emiliano Zapata” community at Mexico’s Gulf Coast ready to take action against fracking projects on their land. I thought that I would find myself in the middle of powerful protests, like Standing Rock in 2016. Yet, instead I took part in the calm everyday life of the community. It seemed like most people were rather indifferent concerning the issue of fracking. How was this possible in one of the most fracking-affected areas in Mexico? A closer look revealed multiple reasons for the remarkable tranquility faced with the alleged threat for their community.

An history of habituation

The Emiliano Zapata community was founded in 1936 as an ejido, i.e. an area governed as communal land used for agricultural purposes. While common goods were managed collectively the land was farmed individually by each ejidatario. The indigenous ´Tononac´ dominated the community, practicing subsistence farming of maize, beans, chilies and vanilla. As my interlocutors explained, people travelled by donkey or foot to nearby markets, a journey which was not only long, but also dangerous, given that assaults were very common in the region. Moreover, violence intensified due to a lacking presence of any external entity granting security.

This life of subsistence farming started to change in the 1950s, when the state-run company PEMEX, started operations in Emiliano Zapata in 1955. The company first built a countryside highway connecting their construction sites and the community to the towns of Papantla and Poza Rica, followed by other infrastructure such as pipelines; oil wells with pumpjacks, burners and treatment plants. Even military barracks were built in order to provide safety for the company and its workers in this area which struggled with the violent situation mentioned above. For its construction projects, the company looked for local laborers and many young members of the community benefitted from these new opportunities. In addition, PEMEX offered financial compensation to the ejidatarios for giving their parcels of land to them. Most of these farmers had never seen such an amount of money in their life before.

Life within the community changed drastically: crops could be sold easily at the market, because the new road led directly to the town and the company`s security made sure it was safe to travel. Many people immigrated to the community to work for the company or within the economic infrastructure created around the community and the extraction sites. In order to earn more money, most farmers changed their production and shifted to oranges and lemons, which sold better than maize, beans and vanilla. Besides new opportunities, this new economy also brought new challenges. Vanilla, for example, stopped growing in the region because the plant struggled with the increasing contamination of soil. Moreover, not only were unfiltered waste products led into the river and the soil, but also accidents like gas explosions, loud drilling next to the houses and insufficient treatment of chemical waste products were – if not normal – at least very common. Thus, through the arrival of the company the community grew, many new business opportunities were created, but the traditional economy and social structure also changed. Furthermore, the community members had to get used to new problems, such as the severe contamination and the new infrastructure in the immediate vicinity of their homes and fields. 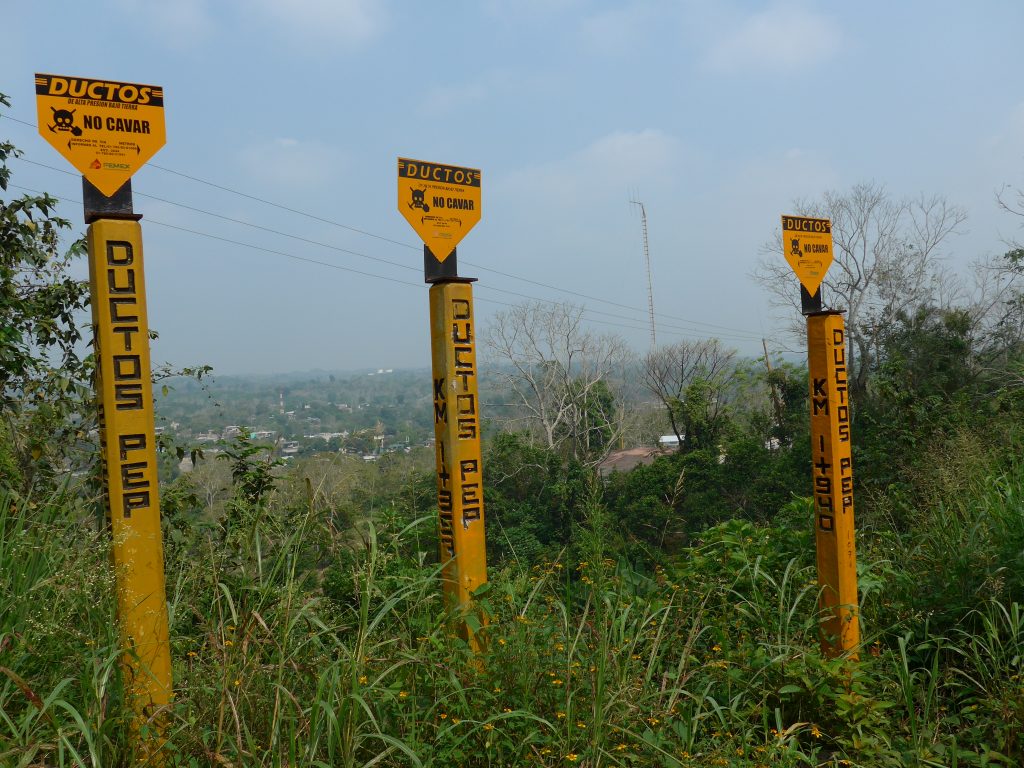 Today, the negative effects of fracking are part of everyday life in Zapata. The river, which is the community´s main water source, gets polluted almost twice a year by chemicals, but the community members are used to it. Also there are arrangements with the company to bring fresh water to the houses until the rivers are cleaned. . Similarly, the contamination of crops due to pipe leakages is not a novelty. Many of the orange trees are not productive and it is hard to live of agriculture in present times given the great competition in orange production and the low prices for agricultural products in general. Furthermore, by offering basic health assistance and building new infrastructures around extractive areas, the community became more dependent on the company assistance.

However, the economic situation has changed significantly during the last decade. When the oil price started dropping in 2007/2008 and then dropped again during the implementation of the energy reform in 2013, PEMEX activities in the community decreased a lot. Now, many of the community members have to find a job elsewhere. Usually, men are the providers of the family. Hence, like in many places in Mexico, the majority of men of working age have left their homes to send remittances to their families with what they earn in the big cities or abroad. Most of the younger generation is looking for an opportunity to study in another city to get a well- payed job.

When new techniques of fracking were implemented in Zapata, some of the people who heard about it started worrying about new risks of pollution and possible damages to their homes and land. A year ago, in 2016, some even united with protest movements in the region and organized demonstrations and blockages, like those mentioned in the articles I had read beforehand. But, this was not the everyday social reality of the community. Many community members also hoped for more compensation money for their already damaged crops. Others hoped for the return of their relatives since there would be new job opportunities in the community. The long history the community had with different kinds of fossil fuel extraction had led to a certain habituation and mutual dependency of companies and inhabitants. 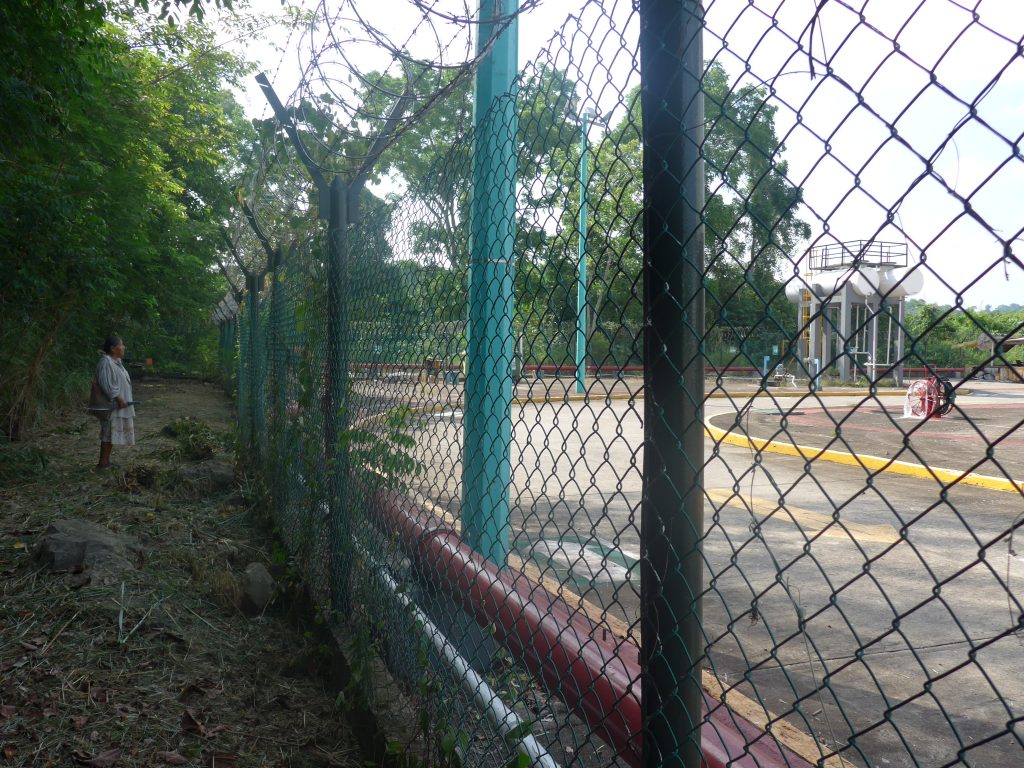 Doña Paula is contemplating the treatment plant which PEMEX built in the 1960ies about 200 meters behind her backyard. Picture by Schöneich.

The case of Emiliano Zapata shows the complex manner of how extractive activities are deeply interwoven with economic strategies and social structure. This reveals the issue of fracking as quite more complex than a simple matter of dispute between a local community and a powerful company as natural opponents as it is often depicted in mainstream media. It is therefore necessary to understand the particularities of single cases in order to grasp and successfully answer the challenges of new extractive technologies like fracking.